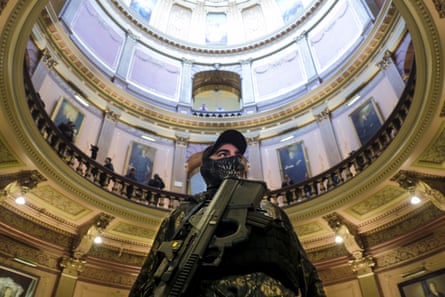 Armed militia groups are forging alliances in the final stages of the US presidential election with conspiracy theorists and anti-vaxxers who claim the coronavirus pandemic is a hoax, intensifying concerns that trouble could be brewing ahead of election day.

Leading advocates of anti-government and anti-science propaganda came together at the weekend, joined by the founder of one of the largest militia groups. The rare connection occurred at the Red Pill Expo, a conference convened on Jekyll Island, Georgia – a symbolic location as it is the birthplace of the US Federal Reserve, a popular bogey figure for conspiracy theorists.

The summit, staged indoors in front of a packed and maskless audience of about 350, was headlined by Stewart Rhodes, president of the Oath Keepers. The militia, which turned up menacingly at several Black Lives Matter (BLM) protests over the summer and has acted as a vigilante squad at numerous Donald Trump campaign rallies, has links to 25,000 current or past members, mostly military or police veterans.

Rhodes aroused the crowd of “Red Pillers”, as they called themselves, with incendiary language. He denounced BLM as a “communist front” and encouraged attendees to seek training in firearms and militia activity as the election approaches.

“You are your own self-defense,” he said. “You must organize yourselves in the next 30 days in your towns and counties. We have members in every state in the union and we are standing them up right now.”

Rhodes said the turbulence around “radical left” protests had brought “a flood of special warfare operatives into the Oath Keepers”. He cited former navy Seals and special force personnel from Fort Bragg, the US army garrison in North Carolina.

A number of groups monitoring far rightwing paramilitary activity have warned in recent weeks that militia groups and individuals online are increasingly focusing their attentions on the presidential election. The chatter has been fueled by Trump’s provocative remarks casting doubt on the integrity of the voting process and calling on his supporters to turn up at polling places on election day.

Anxiety is also growing around the activities of white supremacist domestic terrorist groups, which federal agencies now recognize as an especially dangerous threat. Last week six people were charged in a plot to kidnap the governor of Michigan, Gretchen Whitmer.

At the Red Pill gathering, the Oath Keeper president set his sights openly on election day. He said that on 3 November “we will have our men deployed outside the polling stations to make sure you are protected, especially in swing states”.

Rhodes’ appearance marked an unusually overt fusion of interests between armed far-right groups and anti-government and anti-pharmaceutical conspiracy theorists. Several of his fellow keynote speakers denounced the coronavirus pandemic as a fraud cooked up by global elites as a ploy to subjugate the American people.

Betsy Quammen, author of a book on the 2014 Bundy standoff in Nevada who attended the Red Pill event as a monitor, said the union of disparate virulent movements was troubling. “As somebody who’s been studying militia maneuverings and conspiracy theorists, it’s disconcerting to see these various groups uniting under a common banner of mistrust about coronavirus.”

She added that the timing of the meeting so close to the election was alarming.

Among the speakers at the summit, Mikki Willis followed Rhodes in talking up the actions of armed rightwing individuals. Willis is known for having been the director of Plandemic, the viral video that spread the lie that coronavirus was invented by big drug companies and Bill Gates, among others.

He boasted to the Red Pill audience that he had also made a laudatory video about Kyle Rittenhouse, the teenager charged in August in the killing of two people during anti-police brutality protests in Kenosha, Wisconsin. Willis praised the alleged shooter, whom Trump also notably failed to denounce, as a “very stand-up citizen”.

David Icke, the British conspiracy theorist widely denounced for antisemitic hate speech, was beamed into the summit by video from the UK. He traded misinformation about the “pandemic hoax”, accusing a global “cult” of elites of having creating a coronavirus vaccine that was in fact a “sterilization agent” that would be used to destroy humanity.

Two other major strains of misinformation were represented at the weekend. Del Bigtree, producer of the anti-vaccination film Vaxxed, which features the disgraced British doctor Andrew Wakefield, also portrayed the pandemic as a global conspiracy aiming to take control over people’s lives.

Bigtree pointed to a poll last month that suggested that two-thirds of Americans would be hesitant to get a Covid vaccine when it first became available. He said the survey showed the anti-vaccination movement was winning: “Man, does it feel good!”

He also praised Trump as a “brave individual” and someone “I’ve watched wear a mask less than anyone else”.

The last group given a voice at the gathering were peddlers of industrial bleach, who market the chemical as a “miracle cure” for all known ailments including malaria, HIV/Aids, cancer and Covid-19. Kerri Rivera, a leading advocate of chlorine dioxide as a treatment for autism, talked to the summit by video link from Germany.

“If people took chlorine dioxide for most illnesses, few doctors would be needed and the pharmaceutical industry would be bankrupted,” she said.

She also claimed the bleach, which is used in industrial textile manufacturing, had no major side effects. In fact, the US Food and Drug Administration has warned that consuming it can be life-threatening and incidents of death have been recorded.

Several leading bleach pushers in the US are currently in jail on federal charges.

I want to thank Nan for sending me the link.   I have not been able to get to as much news as I would like lately.   My time at the computer has been more restricted of late.

I want to point out one thing that stood out for me.   The guy promising his armed people would be at the polls in swing states.  “At the Red Pill gathering, the Oath Keeper president set his sights openly on election day. He said that on 3 November “we will have our men deployed outside the polling stations to make sure you are protected, especially in swing states”.”  Just what is he protecting them from?  What is the job of those armed people?  These are people so insecure they need to take a gun to the grocery store.   What they are really saying is we will try to keep non-whites, POC, from voting.   In some countries people can be killed trying to vote.   It happens in some countries, but has not and should not happen in the US.   It is horrible that people have to wait 8 to 12 hours in line to vote, unacceptable, but no one is being assaulted trying to … yet.  These people want to make the US undemocratic.   They want to take away the vote.   If they loved democracy as they claim they would be signing everyone up to vote, not just their race or religion.   These people have learned nothing from history.  I have seen countries devolve into theocracies and they always become less than they were in every respect.   It is much worse for the people.   I have seen countries struggle to achieve freedoms and rights, to get democracy such as Thailand right now, and these people in this article want to take away what we have that those people are dying for.    The people in this article want the right to rule.   They don’t want discussion, they don’t want debate, they do not want the will of the people.  These groups are like tRump in that they want to be absolute rulers.   The ones who make and get to enforce the rules.   That way they never have to pay the price for their wrong doing, but can make others pay for any grievance they choose.    Hugs