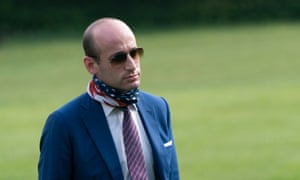 Stephen Miller’s wishlist that is expected to include an attempt to end birthright citizenship and slashing refugee admissions to zero. Photograph: Chris Kleponis/EPA

The architect of Donald Trump’s hardline immigration policy, senior adviser Stephen Miller, is said to have a drawer full of executive orders ready to be signed in “shock and awe” style if Trump is re-elected.

The former homeland security department chief of staff Miles Taylor said this wishlist was reserved for the second term because it included policies that were too unpopular for a president seeking re-election.

The 35-year-old has managed to keep his position as a senior adviser to the president after being exposed for having an affinity for white nationalism and becoming synonymous with unpopular Trump administration policies such as family separation – when thousands of children were taken away from their parents at the southern border to deter would-be migrants. Three years later, more than 500 kids are still yet to be reunited with their parents.

Jean Guerrero, the author of the Miller biography Hatemonger, told the Guardian: “There’s a number of things they have been cautious about because of the legal and political risks in the first term and I think that in a second term you would see Stephen Miller get much freer rein when it comes to his wishlist of items.”

Those items are expected to include attempting to eliminate birthright citizenship, making the US citizenship test more difficult to pass, ending the program which protects people from deportation when there is a crisis is their country (Temporary Protected Status) and slashing refugee admissions even further, to zero.

Miller wields an unusual amount of power in the administration, particularly the homeland security department (DHS), which is tasked with responding to threats from natural disasters, cybersecurity and terrorism. It is also the base of the country’s immigration agencies, which Miller has zeroed in on with a relentless focus.

He was a driving force behind a purge of homeland security officials early last year, which has left some positions in the department vacant or held by temporary officeholders for more than a year. He has even been known to intervene in specific immigration cases by contacting low-level staffers.

“Stephen Miller wanted the leadership to constantly have immigration and border issues as their top priority, and he ensured that happened by manipulating the bureaucracy, by constantly invoking Trump’s demands, Trump’s desires,” said Guerrero, an investigative journalist. “The cabinet secretaries are aware of Stephen Miller’s relationship with the president.”

Miller’s rooted position in the White House was underlined late last year, when a Southern Poverty Law Center (SPLC) report showed the presidential adviser endorsing white supremacist views in emails to a writer at Breitbart News. It was a discovery that would have brought down prominent figures in other administrations, but not in the Trump White House.

In the wake of the report, seven Trump officials in anonymous interviews with the Daily Beast said the story didn’t endanger Miller’s position and two people laughed at the suggestion.

The Leadership Conference on Civil and Human Rights was one of at least 55 civil rights groups to demand Miller resign, or be fired, after the report was published. More than 80 members of Congress made the same demand, but nearly a year later, he remains.

Becky Monroe, the director of the immigrant rights program at the Leadership Conference on Civil and Human Rights, said white supremacy and white nationalism are not new to the US but Miller’s staying power underlined how accepted it is in the Trump White House.

“This administration’s open embrace of white nationalism and white supremacy has shaped its policies to such an extent that people are feeling emboldened outside the government to commit acts of hate,” Monroe said.

In 2018, violent hate crimes and threats reached their highest levels in the US in 16 years, according to FBI data released late last year. Last month, a DHS whistleblower said the agency was told to downplay the threat from white supremacists.

In the final months of the 2020 presidential race, Trump has used anti-immigrant rhetoric at substantially lower rates compared with 2016, but his policies continue to dominate the news.

Last week, the SPLC released a report based on emails by the White House deputy communications director, Julia Hahn, showing her connections to the white nationalist movement. Hahn had exchanged emails with Miller in the lead-up to the 2016 election while working at Breitbart.

Monroe, who worked in the justice department and in the White House during Barack Obama’s administration, said while the US election forces people to consider what four more years of Miller could look like, his influence persists.

Monroe said: “His policies and his rhetoric have really taken seed in this administration, and they all need to be held accountable.”

I do not understand Miller and people like him.   He benefits from the very programs he now tries to eliminate.   How he can have such hate stuns me.   How can a person work so hard to make things worse for those who already have it really bad?  I agree that the policies and the people pushing them need to be investigated for legality.  Hugs