I posted about this yesterday but here is more information and more video.   This is something I would expect in Russia or a dictatorship.  Or the 1950’s.   Hugs

On the final day of early voting in North Carolina, police in Alamance County pepper-sprayed a group of voters who were marching to the polls, leaving demonstrators injured and vomiting in the streets.

At least one journalist was arrested in the chaotic showdown on Saturday in Alamance County, a red county but one that may decide which party controls the state legislature next year.

About 250 people—most of them Black—were taking part in an event called “I Am Change Legacy March to the Polls” and on their penultimate stop before visiting a polling place in downtown Graham when cops intervened.

Just after several speakers, including Ian Baltutis, mayor of neighboring Burlington, had addressed the crowd, Alamance County sheriff’s deputies dressed in camo, gas masks and tactical gear stood in formation on the steps of the Historic Courthouse behind the stage. They ordered the protesters to disperse, and announced they would begin arresting people.

“I will stand my ground,” the Rev. Greg Drumwright said from atop the temporary stage, beneath the shadow of a Confederate monument.He told the deputies, “When you get involved, peaceful protests always turn into chaotic situations.”

Then, deputies grabbed Drumwright and at least four others and tackled them to the ground, while other officers advanced on protesters, legal observers and journalists, and forced them into the street.

Police using pepper spray at a voter rally in N.C., Trumpers trying to drive a Biden bus off the road and getting a shout out from the president, an effort to get a judge to throw 100k votes out in Texas…. Quite the close of the campaign here.

Voters taking part in a march to the polls were pepper-sprayed in North Carolina on Saturday. One journalist was arrested and children were seen coughing and vomiting in the street. https://t.co/2IlxrTPMbI 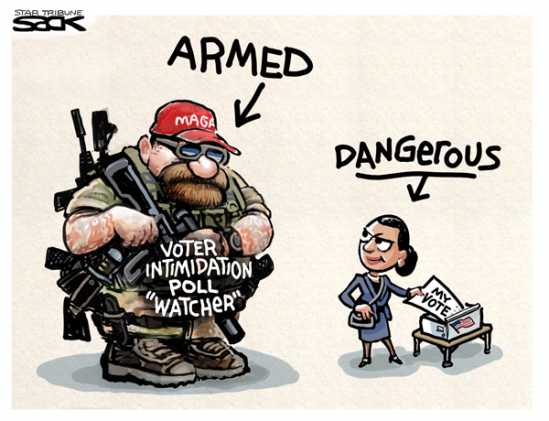 In the comments someone made mention that blue is the new brown, and another asked when the racist cops would simply stop pretending and go full on 1950’s on black voters.  Now it has happened.   Hugs