I just read that Judge Sullivan ordered the Postal Service to sweep all post office processing places for undelivered ballots and to deliver them before the polls close.   Wow, he doesn’t play games.   From everything we have seen this was a deliberate attempt to stop mail in voting, to disenfranchise a large segment of the population.   Even after ordered by the courts to stop doing it Dejoy under the orders of tRump kept it up.   There has to be some punishment for these people, punishment they will feel the sting of.   They knew when they implemented these policies they were designed to slow down ballot delivery and interfere with voting.   You know that because Dejoy took ballots from being priority mail to a much lower standard.   Hugs 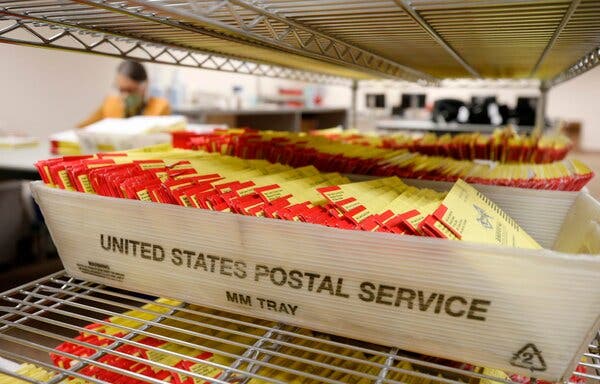 The U.S. Postal Service experienced some of its worst delays all year in the final week before the election, according to a Times project tracking first-class. An avalanche of late-arriving political pamphlets and advertisements appears to have added to backlogs for the Postal Service, after months of slowdowns.

The Postal Service reported that its workers have prioritized election mail, and that most ballots that are easily tracked have been processed on time. But there are also signs in the official data that even some ballot processing has slowed as Election Day approached.

The week beginning Oct. 26 was the slowest week recorded for local mail, which the Postal Service aims to deliver within two days. But a delay of even one day for ballots in the final stretch of the presidential election could make the difference between a vote that is counted and one that is not, especially as legal fights continue in crucial states over whether to count ballots that are postmarked before Election Day but arriving after it.

To see how often mail was late, and where in the country the delays have been most profound, click here.

2 thoughts on “The Times has been tracking delays in mail delivery. Last week was one of the slowest to date.”