Christian Nationalist “Patriot Churches” Are Popping Up Around the Country

It’s no surprise that Christian Nationalism has seen a surge during the Trump administration, with a lot of right-wingers perpetuating the false belief that America is inherently a “Christian nation.” In practice, that means they want our laws and culture to accommodate whatever conservative Christians believe — even if it comes at the expense of civil rights for minority groups or religious freedom for non-Christians. They worship God, guns, cops, the flag, and the absurd notion that America used to be great at some nebulous time in the past and we would be better off returning to that (non-existent) point.

For the most part, this has been a political idea. It’s lawmakers who push this idea that we’re a “Christian Nation.” But in an article for the Washington Post, reporter Sarah Pulliam Bailey says that a new breed of churches is joining the fray. Take one look at these “patriot churches,” and you’d be forgiven for wondering if the real object of worship is Jesus or the Founding Fathers. 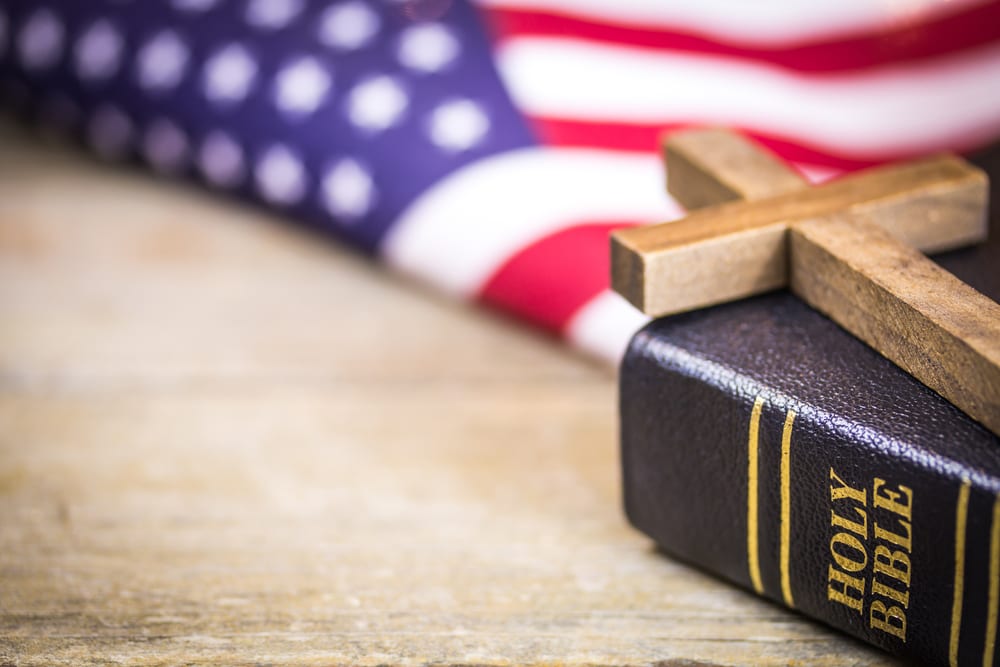 This is a Patriot Church, part of an evolving network of nondenominational start-up congregations that say they want to take the country back for God. While most White conservative Christian churches might only touch on politics around election time and otherwise choose to keep the focus during worship on God, politics and religion are inseparable here. The Tennessee congregation is one of three Patriot Churches that formed in September. The other two are near Liberty University in Lynchburg, Va., and in Spokane, Wash., and [Pastor Ken] Peters says he is talking with several more pastors of existing churches who want to join them.

The 50 or so people in attendance may identify as born-again or just as generic “Bible-loving” Christians. Peters’s flock is not affiliated with a specific denomination, but it does have a distinct identity. The Patriot Churches belong to what religion experts describe as a loosely organized Christian nationalist movement that has flourished under President Trump. In just four years, he has helped reshape the landscape of American Christianity by elevating Christians once considered fringe, including Messianic Jews, preachers of the prosperity gospel and self-styled prophets. At times, this made for some strange bedfellows, but the common thread among them is a sense of being under siege and a belief that America has been and should remain a Christian nation.

In case you needed more evidence that Trumpism is a full-blown cult, look no further. If you needed more proof that the foundation of Trumpism is bigotry, again, look no further. These are churches that — even if they won’t say it out loud and even if they specifically say otherwise — promote bigotry against non-Christians, LGBTQ people, immigrants, and people of color.

Gone are the days when the “American Dream” had anything to do with equality, or freedom of religion, or the ability for an immigrant to create a better life in a “land of opportunity.” The new American Dream, per these churches, is a nation that elevates white, straight, cis-gendered Christians who confuse disagreement with persecution, then throw temper tantrums when asked to make small sacrifices to protect the health of their neighbors. It’s a nation of petulant crybabies who are afraid of sharing the sandbox with anyone else.

It might be amusing if it weren’t so toxic.

And to longtime readers of this site, it shouldn’t surprise you that Pastor Greg Locke — the Trump cultist who, last year, literally burned a copy of a book that said we were not a Christian nation — is right in the middle of the movement.

[Peters] settled near Knoxville in July after Tennessee pastor Greg Locke, a Trump adviser, encouraged Peters to start a church in his state. Locke also donated $20,000 to the cause, because he contends Christians are in a kind of war with government. “They have us cowered down in a basement with our masks and require our churches to be closed,” Locke said in an interview. “That’s not Christian or American. We’re in the fight for our life.”

He’s confusing public safety restrictions with an attack on his religion because he’s not very intelligent. But it’s not surprising for Locke to play this game since his church has hosted the likes of convicted felon Roger Stone and conservative Charlie Kirk. In other words, his congregation is more likely to hear from Republican activists than Christian preachers.

But to people like them, is there really even a difference?