So much for states rights.  Why do these agents need to be armed?    Are they expecting an armed shootout.   Is the    fact that they sent poll watcher to democratic leaning districts mean anything?   Hugs

Former officials expressed fears that the department’s legal interpretation would allow federal investigators to intimidate vote counters or interfere with their work. 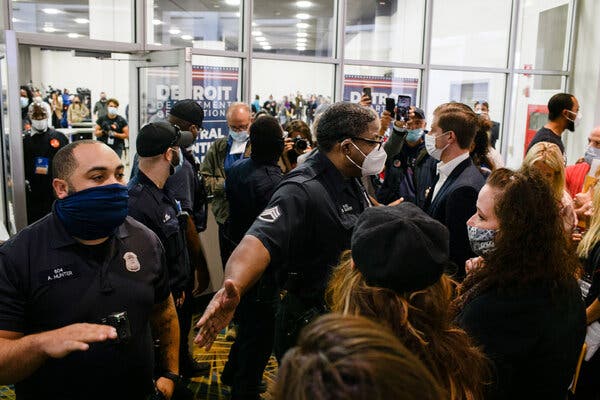 The Justice Department told federal prosecutors in an email early on Wednesday that the law allowed them to send armed federal officers to ballot-counting locations around the country to investigate potential voter fraud, according to three people who described the message.

The email created the specter of the federal government intimidating local election officials or otherwise intervening in vote tallying amid calls by President Trump to end the tabulating in states where he was trailing in the presidential race, former officials said.

The statute “does not prevent armed federal law enforcement persons from responding to, investigate, or prevent federal crimes at closed polling places or at other locations where votes are being counted,” the official, Richard P. Donoghue, told prosecutors in an email that he sent around 1:30 a.m. on Wednesday.

A Justice Department spokeswoman did not respond to a request for comment.

Mr. Donoghue, the No. 2 official in the office of the deputy attorney general, Jeffrey A. Rosen, sent his email about half an hour before Mr. Trump made reckless claims including falsely declaring himself the winner of the election and began calling for election officials to stop counting ballots.

“We want all voting to stop,” Mr. Trump said at the White House. He said, without offering details, that his campaign would “be going to the U.S. Supreme Court” over the election count. The Trump campaign said later in the day that it was filing lawsuits in multiple states, including Michigan, to halt or protest vote counts.

One state election official vowed to resist any interference or intimidation efforts by federal officials.

“Elections are a state matter, and we have authority as state officials over anyone trying to enter locations where ballots are being counted,” said Attorney General Maura Healey of Massachusetts. “Anything else is a radical reinterpretation of the law. States can handle elections, and we will ensure the people decide the outcome.”

The election has been both unusual and charged. A historic number of mail-in ballots, prompted by the pandemic, have slowed the work of local election officials who tally them. And Mr. Trump has for months stoked fears about the integrity of the vote and amplified unfounded conspiracy theories that slow-counting states could not be trusted, intensifying his baseless accusations as the count stretched on past Election Day and his opponent, Joseph R. Biden Jr., gained an edge in key states.

Attorney General William P. Barr also spent the months leading up to Election Day echoing the president’s dark warnings, claiming without evidence that the wave of mail-in ballots would lead to an unprecedented amount of voter fraud.

He cited one example of 1,700 falsified ballots that The Washington Post found to be false. A department spokeswoman blamed an inaccurate memo from an aide.

“This seems like a messaging tactic for the attorney general,” said Vanita Gupta, the acting head of the department’s Civil Rights Division under President Barack Obama. “Lawfully, the Justice Department can’t interfere in the vote count, enter polling places or take ballots, even in the course of an investigation.”

In instances where the department can secure access to ballots for any investigation, Ms. Gupta said that federal law allowed law enforcement officials to “copy and inspect, but that ballots stay in the hands of local election officials.”

Justice Department officials said this week that they expected lawyers for the Trump and Biden campaigns to take on court challenges related to the election, and that the Trump administration would have little, if any, role.

Election experts said that any effort by the Justice Department to blatantly interfere in the election would immediately prompt legal challenges. Still, armed officials arriving at ballot-counting locations even for investigatory purposes could intimidate or otherwise disrupt the process, they warned.

“The very strong, longstanding norm is that the federal government does not seek to do anything to interfere with a state’s ability to count votes and certify elections,” said Kristy Parker, an official in the department’s Civil Rights Division during the Obama administration.