If President Trump loses his bid for re-election, as looked increasingly likely on Wednesday, it would be the first defeat of an incumbent president in 28 years. But one thing seemed certain: Win or lose, he will not go quietly away.

Trailing former Vice President Joseph R. Biden Jr., Mr. Trump spent the day trying to discredit the election based on invented fraud claims, hoping either to hang onto power or explain away a loss. He could find a narrow path to re-election among states still counting, but he has made clear that he would not shrink from the scene should he lose.

At the very least, he has 76 days left in office to use his power as he sees fit and to seek revenge on some of his perceived adversaries. Angry at a defeat, he may fire or sideline a variety of senior officials who failed to carry out his wishes as he saw it, including Christopher A. Wray, the F.B.I. director, and Dr. Anthony S. Fauci, the government’s top infectious diseases specialist in the middle of a pandemic.

And if he is forced to vacate the White House on Jan. 20, Mr. Trump is likely to prove more resilient than expected and almost surely will remain a powerful and disruptive force in American life. He received at least 68 million votes, or five million more than he did in 2016, and commanded about 48 percent of the popular vote, meaning he retained the support of nearly half of the public despite four years of scandal, setbacks, impeachment and the brutal coronavirus outbreak that has killed more than 233,000 Americans.

That gives him a power base to play a role that other defeated one-term presidents like Jimmy Carter and George Bush have not played. Mr. Trump has long toyed with starting his own television network to compete with Fox News, and in private lately he has broached the idea of running again in 2024, although he would be 78 by then. Even if his own days as a candidate are over, his 88-million-strong Twitter following gives him a bullhorn to be an influential voice on the right, potentially making him a kingmaker among rising Republicans.

“If anything is clear from the election results, it is that the president has a huge following, and he doesn’t intend to exit the stage anytime soon,” said former Senator Jeff Flake of Arizona, one of the few Republican officeholders to break with Mr. Trump over the past four years.

That following may yet enable Mr. Trump to eke out a second term and four years to try to rebuild the economy and reshape the Republican Party in his image. But even from out of office, he could try to pressure Republican senators who preserved their majority to resist Mr. Biden at every turn, forcing them to choose between conciliation or crossing his political base.

Until a new generation of Republicans steps forward, Mr. Trump could position himself as the de facto leader of the party, wielding an extraordinary database of information about his supporters that future candidates would love to rent or otherwise access. Allies imagined other Republicans making a pilgrimage to his Mar-a-Lago estate in Florida seeking his blessing. 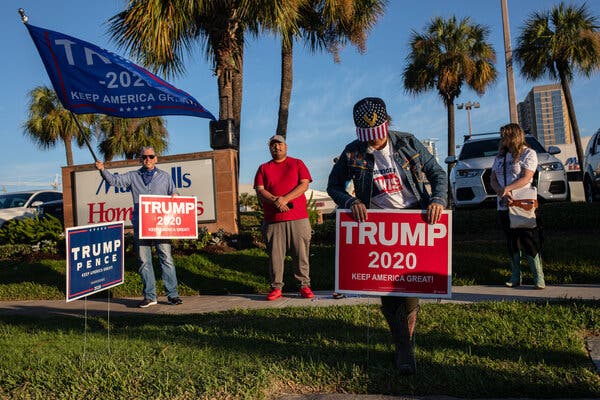 “It isn’t like his Twitter account or his ability to control a news cycle will stop,” said Brad Parscale, the president’s first campaign manager in this election cycle. “President Trump also has the largest amount of data ever collected by a politician. This will impact races and policies for years to come.”

Exit polls showed that regardless of prominent Republican defectors like Senator Mitt Romney of Utah and the Never Trumpers of the Lincoln Project, Mr. Trump enjoyed strong support within his own party, winning 93 percent of Republican voters. He also did somewhat better with Black voters (12 percent) and Hispanic voters (32 percent) than he did four years ago despite his often racist rhetoric. And after his high-energy blitz across battleground states, late-deciding voters broke his way.

Some of Mr. Trump’s arguments carried considerable weight with members of his party. Despite the coronavirus pandemic and the related economic toll, 41 percent of voters said they were doing better than when he took office, compared with only 20 percent who described themselves as worse off. Adopting his priorities, 35 percent of voters named the economy as the most important issue, twice as many who cited the pandemic. Fully 49 percent said the economy was good or excellent, and 48 percent approved of his government’s handling of the virus.

“If he is defeated, the president will retain the undying loyalty of the party’s voters and the new voters he brought into the party,” said Sam Nunberg, who was a strategist on Mr. Trump’s 2016 campaign. “President Trump will remain a hero within the Republican electorate. The winner of the 2024 Republican presidential primary will either be President Trump or the candidate who most closely resembles him.”

Not all Republicans share that view. While Mr. Trump will no doubt continue to speak out and assert himself on the public stage, they said the party would be happy to try to move beyond him if he loses and he would be remembered as an aberration.

“There will never be another Trump,” said former Representative Carlos Curbelo of Florida. “Copycats will fail. He will gradually fade, but the scars from this tumultuous period in American history will never disappear.”

Indeed, Mr. Trump failed to reproduce his fluky 2016 success when he secured an Electoral College victory even while losing the popular vote to Hillary Clinton. For all of the tools of incumbency, he failed to pick up a single state that he did not win last time, and as of Wednesday, he had lost two or three, with a couple of others still on the edge.

Other presidents evicted after a single term or less — like Gerald R. Ford in 1976, Mr. Carter in 1980 and Mr. Bush in 1992 — tended to fade back into the political shadows. Mr. Ford briefly contemplated a comeback, Mr. Carter occasionally criticized his successors and Mr. Bush campaigned for his sons, but none of them remained major political forces within their party for long. Politically, at least, each of them was seen to various degrees as a spent force.

The last defeated president to try to play a power-broker role after leaving office was Herbert Hoover, who positioned himself to run again after his loss in 1932 to Franklin D. Roosevelt and became an outspoken leader of the conservative wing of the Republican Party. While he wielded significant influence for years, it did not regain him the nomination nor change the verdict of history. 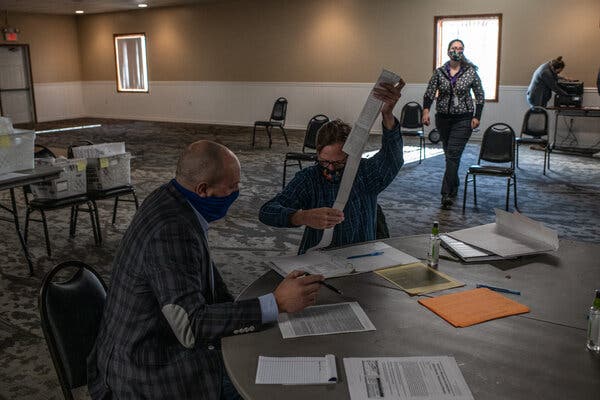 For Mr. Trump, who cares about “winning, winning, winning” more than almost anything, being known as a loser would be intolerable. On Election Day, during a visit to his campaign headquarters, he mused aloud about that. “Winning is easy,” he told reporters and staff members. “Losing is never easy. Not for me it’s not.”

To avoid such a fate, the president sought on Wednesday to convince supporters that the election was being stolen simply because state and local authorities were counting legally cast ballots. The fact that it was not true evidently mattered little to him. He was setting up a narrative to justify legal challenges that even Republican lawyers called groundless and, should those fail, to set himself up as a martyr who was not repudiated by the voters but somehow robbed by unseen nefarious forces.

Mr. Trump himself has a long history on the other end of fraud allegations. His sister asserted that he got someone else to take his college-entrance exam. The daughters of a Queens foot doctor claimed that their late father gave Mr. Trump a diagnosis of bone spurs to protect him from the draft for the Vietnam War as a favor to Fred Trump, his father. And his business dealings have often ensnared him in allegations and law suits.

The younger Mr. Trump paid $25 million to students of his Trump University to settle fraud accusations. His charitable foundation was shut down after the authorities found a “shocking pattern of illegality.” He participated in dubious tax schemes during the 1990s, including instances of outright fraud, according to a New York Times investigation. And Michael D. Cohen, his estranged lawyer and fixer, wrote in a recent book that he rigged two online polls on Mr. Trump’s behalf.

The president has survived all of that and a string of bankruptcies and other failures through a life of celebrity and populist appeals that gave him the aura of a winner that he nurtured. From his time in real estate and reality television, he has been part of the country’s pop culture firmament for 30 years, a recurring figure in movies, television shows and his own books. 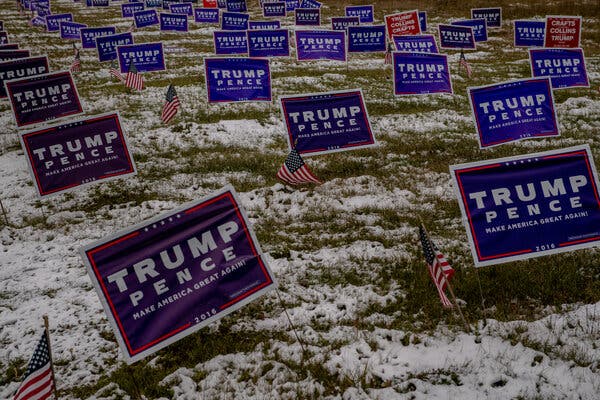 He has been, for millions, a symbol of gold-gilded aspiration and wealth. He was the star of a popular television series for 14 seasons, one that introduced him to the country long before he ran for office. And once he did, his boisterous rallies bonded his supporters to him in a way that underscored how much of a cultural phenomenon he is.

For months, as his chances of being re-elected dwindled, Mr. Trump told advisers — sometimes joking, sometimes not — that should he lose he would promptly announce that he was running again in 2024. Two advisers said they anticipate he will make good on that declaration if his legal challenges fail and is defeated, a move that if nothing else would allow him to raise money to finance the rallies that sustain him.

When he appeared likely to lose his original campaign in 2016, he and some of his family members talked about starting a media property, loosely conceived of as “Trump TV.” Some of those discussions have continued into this year, according to people familiar with them.

“There’s no question that he is one of the greatest polarizing political figures of modern history,” said Tony Fabrizio, one of Mr. Trump’s pollsters. “His supporters adore him and his opponents revile him. There is no middle ground on Donald Trump.”

Twitter announced that the special treatment tRump enjoys as president will cease on January 20th 2020.  After that he will be treated as any other twitter user and must obey the rules or have his account locked or deleted.   Hugs

8 thoughts on “Win or Lose, Trump Will Remain a Powerful and Disruptive Force”