Because politics are so much more important than the health and safety of the people they are sworn to serve.    Hugs

The politicization of mask-wearing shows how difficult it will be for Joe Biden to build consensus around even basic public health strategies after he’s sworn in.

Almost all of the 16 Republican governors who oppose statewide mask mandates are ready to reject Biden’s plea, they told POLITICO or declared in public statements — even as they impose new restrictions on businesses and limit the size of public gatherings to keep their health systems from getting swamped.

South Dakota’s Kristi Noem, Oklahoma’s Kevin Stitt and Nebraska’s Pete Ricketts, whose states are engulfed by new cases, say mask wearing should remain a personal choice, not a legal obligation — despite recommendations from health officials and updated guidance from the Centers for Disease Control stressing that masks protect the wearer, not just people nearby, from infection.

“Governor Noem has provided her people with the full scope of the science, facts, and data regarding the virus, and then she has trusted them to exercise their personal responsibility to make the best decisions for themselves and their loved-ones,” Noem spokesperson Ian Fury wrote in an email. “She will not be changing that approach.”

The politicization of mask-wearing shows how difficult it will be for Biden to build consensus around even basic public health strategies after he’s sworn in.

Though President Donald Trump is on his way out, he’s poised to hold strong influence over GOP officials and voters who’ve largely backed his efforts to downplay the pandemic.

While some of the same governors expressed frustration earlier in the pandemic about the Trump administration’s lack of support on testing and protective gear, most side with Trump on his aversion to mask mandates. They’ve argued that neither Washington nor state capitals should dictate policies like face coverings, saying they are both onerous and unenforceable. And they’re digging in, even with the virus putting 65,000 people in hospitals and infecting more than 1.2 million people since Nov. 1.

“If President-elect Biden is indeed confirmed to be the next president, and he approaches me about a mask mandate, I would not be going along with a mask mandate,” Ricketts said during a press briefing on Tuesday.

“As far as a mandate, I’ve been very clear I don’t think this it’s the right thing to do,” Stitt, who was infected with the coronavirus earlier this year, said at a briefing on Tuesday. “This is a personal responsibility.”

Several of the Republican holdouts, including Ricketts, have required face coverings for employees and patrons of certain businesses while others, like Stitt, have instead allowed their largest cities to decide on mask orders.

Other Republican governors, like Eric Holcomb in Indiana and Kay Ivey in Alabama have had mandates for months, while Utah Gov. Gary Herbert imposed a statewide order on Sunday night when it became clear this month that his state’s hospitals were overwhelmed.

Asked about the possibility of a mask mandate, a spokesperson for Tennessee Gov. Bill Lee told POLITICO that “nothing’s off the table.” Counties can implement their own orders and so far nearly two dozen, representing two-thirds of the state population have opted to do so. The state reported a record number of new hospitalizations and deaths this week.

“We need to be nimble in our decision-making, but for the time-being, he’s confident the local-based approach is the most effective,” Gillum Ferguson, Lee’s spokesperson, wrote in an email.

Biden plans to implement a science-driven pandemic strategy as soon as he’s sworn in, and has said that if governors aren’t receptive to his arguments, he will take the crusade to the local level by calling mayors and county leaders and urging them to enact mask orders.

He may have little choice with some Republican governors refusing to even acknowledge his election victory, and with the GOP state leaders unified around the belief that mandates don’t increase compliance.

Iowa Gov. Kim Reynolds announced that customers and employees must wear masks at certain businesses, such as salons and tattoo parlors, but she rejected a statewide mandate, saying the decision comes down to individual responsibility.

Asked this week how he’ll be able to work with governors like Reynolds, Ricketts or Noem, Biden said simply: “They will.”

Though he’s blocked from starting to work with federal agencies on the transition, Biden used this week to reiterate that cloth masks are the single most important tool the country has to suppress the virus before a vaccine can be distributed.

“A mask is not a political statement — but it is a good way to start pulling the country together…It’s to give something back to all of us: a normal life,” he said during a Monday press conference announcing his coronavirus task force, which is filled with a slate of veteran public health experts.

Mark McClellan, a former top health official in the George W. Bush administration and a member of Texas Gov. Greg Abbott’s Covid-19 strike force, said he hopes some state leaders will be receptive to Biden’s calls.

“It’s actually a good time for him to be engaging with governors on something like this,” McClellan said. “He doesn’t have the authority of government yet, and this is an issue where you can’t just issue a national mask mandate and to some extent, even a state mask mandate alone. It’s got to be part of a coordinated set of steps.”

Biden this fall suggested he was looking into issuing an executive order creating a national mask mandate if governors continue to resist his entreaties.

But he’s sounded more conciliatory since the election, only discussing executive orders that would mandate masks in federal buildings and on interstate transportation.

“While no decisions have been made about executive actions and no memo about the topic has been sent to the President-elect, he has the same levers at his disposal as all of his predecessors to address the crises facing the American people,” a spokesperson from transition said.

Biden’s transition team declined to comment on when he would begin reaching out to mayors and governors and which states would be the first to get the call.

The U.S. Conference of Mayors says there’s been no communication with Biden or his team on the mask question, but noted the group has “made preliminary outreach to the incoming Administration to let them know that mayors are standing by ready to help.”

It’s not too early to have these conversations, said Obama administration health secretary Kathleen Sebelius, adding the relationships Biden establishes in the next 10 weeks could make the difference between cooperation at the height of a pandemic and a continuation of the patchwork efforts that have allowed the virus to spread widely.

“[Governors] will be at the front line of not only keeping policies and practices in place as safely as possible as we head into these very cold inside winter months, but also being in the front lines of the vaccination effort,” Sebelius said. “I think they need to know that this is a whole new effort by the incoming president, and it will be an entirely new relationship. They will be able to count on the federal government.”

I have noticed that none of these anti-mask freedom clowns seem to have any issue with mandated covering of genitals for the common good, or with females being required to cover their boobs.   So what is different about being required to wear a mask for the public good?  What the hell is with the US being so regressive and uneducatedly anti-science.   Hell why are people so anti society and community?   Hugs 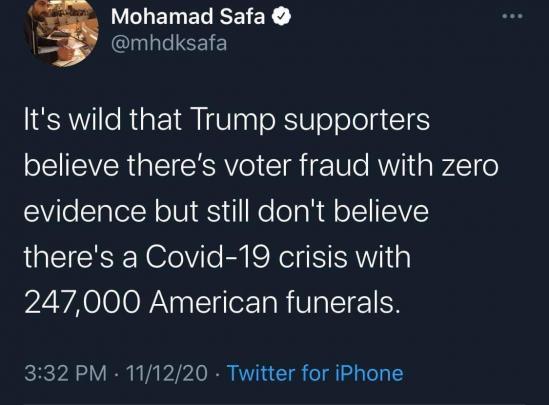