Elizabeth Leiba, a co-host for The EdUp Experience Podcast, is a published writer who wrote for the Sun-Sentinel newspaper and served as the editor of The Seminole Tribune newspaper. She is an English professor at Broward College. The views expressed in this commentary are her own. View more opinion on CNN.

“Innocent until proven guilty” is a phrase we can all recite without even thinking about. It’s as synonymous with America as “Liberty and justice for all” or “Land of the free and home of the brave.”

But scrolling through social media recently, I felt a pang of sadness at just how hollow those statements ring for Black people in America. 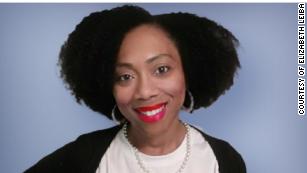 Elizabeth Leiba
Posts heralded as a “triumph” Kyle Rittenhouse’s release on bail. Rittenhouse is the teenager accused of shooting dead two men and injuring another at a Black Lives Matter protest march in Kenosha, Wisconsin, held after the police shooting of Jacob Blake in August. The 17-year-old faces two felony charges of homicide and one misdemeanor charge for possessing a dangerous weapon while under 18. He is free after posting his $2 million bail with the help of donations, according to his lawyer in a tweet, including from celebrities like former “Silver Spoons” child star Ricky Schroder and Mike Lindell, CEO of My Pillow, Inc. and vocal Donald Trump supporter. Rittenhouse’s attorney said that there is evidence that the teen acted in self-defense.
The thought that enough people — after hearing details of the shooting — could see Rittenhouse, who is White, as innocent or justified enough in his actions to supply $2 million to get him released, made me think back to an experience I had in 1993: the moments that led up to my arrest as a 19-year-old sophomore at the University of Florida, where I was on a full academic scholarship.
I had entered an Eckerd drug store in Gainesville early on a Sunday morning to drop off film to develop pictures from my camera. My roommate was still sleeping, so I quietly slipped into a hoodie, jean shorts and sneakers, and left the dorm room, carrying my JanSport book bag with my rolls of film inside. 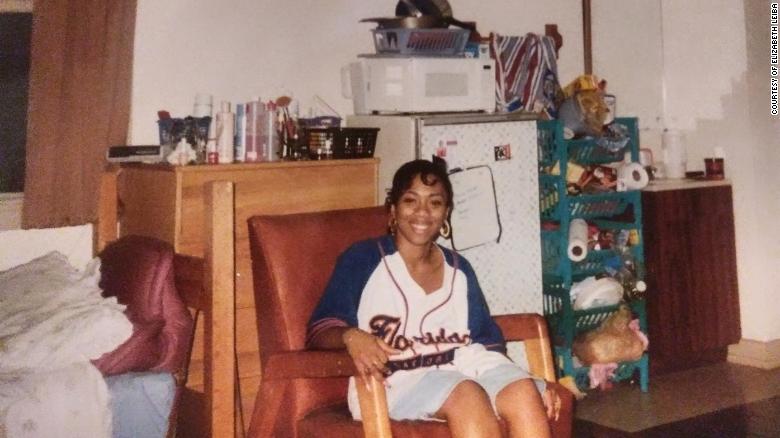 Elizabeth Leiba in her dorm room at the University of Florida.
That book bag would be at the center of my arrest and ultimately why I felt compelled to post about my encounter on LinkedIn recently. Seeing Bernice King, the daughter of Dr. Martin Luther King Jr., tweet her disbelief over the supportive treatment Rittenhouse was getting and comparing it to Kalief Browder’s three years in Riker’s Island — two years of which were spent in solitary confinement — for allegedly stealing a book bag, triggered memories of my own encounter.
Batteries inside my book bag had caused the theft detector to beep as I exited Eckerd’s that Sunday morning. The clerk called me back to ask if I’d purchased anything. I rifled through my book bag and found a four-pack of AA batteries I had purchased days earlier. I frantically attempted to resolve the misunderstanding. He asked if I had a receipt for them. I knew I did somewhere among my folder, papers and other receipts. I continued to rifle. I was even more frantic. My heart pounded as I scanned the contents of my bag. I knew the receipt was there.
Minutes later, I was in a brightly lit office in the back of the store. The manager, an older White woman, slid an immaculate sheet of white paper, with tiny black text printed on it across her brown desk. I would need to sign it, she said. The small font blurred together, as I held it in shaking hands. I asked her to explain. I didn’t understand.
What was it? An admission of guilt and a trespass warning. If I couldn’t produce the receipt for the batteries immediately, I would need to sign it right then and there, she said. But I wasn’t guilty, and I didn’t steal the batteries. So that would be a lie. I couldn’t do that. No.

As a journalism major with hopes of attending law school, my next line of defense to her became logic and reasoning: I attended the university. I was a student on scholarship. I came into this store all the time to shop. I had the receipt, if they could just give me a moment to look. I just needed to think for a minute. I know I kept it. I keep all receipts. I had been taught at a young age to never leave a store without ensuring I had a receipt for the items I had purchased — one of the many lessons Black children grow up having to learn. Just in case you were approached by a security guard, you always wanted to have proof of purchase. Could they look at the security footage? I had walked straight to the photo department without stopping to even browse. I wasn’t a thief.
None of those arguments swayed her. She dialed 911 and two police officers arrived within minutes.
Sitting in the back seat of a police car, the strangest thoughts went through my head: Handcuffs are heavier than they look on TV. If someone isn’t deemed a threat, their hands are cuffed in the front. There are no door handles on the inside of the back seat of a police car and the windows are tinted so you can see out, but no one can see your shame as you sit inside.
I stared down at my cuffed wrists, hands in my lap, as the officers stood outside filling out the arrest report and chatting casually. They laughed at some inside joke. I was numb. This seemed like a dream.
And I would carry that shame and disbelief for a while: The shame that people would think I was a thief. The shame that I had been arrested. The reality that I was seen as guilty before proven innocent.
My mother picked me up from jail, making the five-hour drive from South Florida after posting my bond there. I was booked and placed in a holding cell for four hours and then I was allowed to wait in the lobby until she came to get me. When I got into her car in the jail parking lot, I rifled through the book bag again. Where was that receipt? I had to find it! I found it there neatly folded inside a bright red folder. I cried hysterically. It was there. It was there all along.
We decided to talk to a lawyer about what could be done to get some semblance of justice. He was baffled. He had never seen a case where police were even called for a $2.49 item and suggested I pursue a lawsuit to ensure the store would never do it again. I wouldn’t get much, he cautioned. But it wasn’t about the money. It was about getting them to admit what they had done was wrong. It was about getting them to admit that the trauma I had experienced and the effect on the rest of my life was wrong. And the jury in the civil case ultimately agreed.
But it would take three years for the case to go to trial and finally reach that settlement. Eckerd’s refused to accept responsibility for what they did and fought it every step of the way. Eckerd’s attorney at trial argued that the pharmacy had probable cause for their actions because the manager had checked the anti-theft equipment that day and the employees had no reason to believe it was malfunctioning.
My lawyer produced a copy of the receipt for the state attorney’s office and the criminal charges had been dropped immediately.
Get our free weekly newsletter
As these memories flood my mind, I can’t help but ask: How is it that the employees in that pharmacy couldn’t give me the benefit of the doubt over a $2.49 package of batteries, but Rittenhouse, who has been charged with killing two people, can be extended this courtesy?
To be clear, I understand that this campaign to raise money for Rittenhouse was orchestrated specifically by people on the political right, and yes, the incidents happened in different times and places. I also know that people are free to donate to whatever cause they want.
But we live in a country where Black people routinely see themselves being treated unfairly compared to their White counterparts. It’s a problem that we can’t and shouldn’t ignore. And it’s a problem that instantly causes Black people to collectively ask any time the Kyle Rittenhouses of the world come across our screens: “I wonder how this situation would have played out if he were Black?”