Supreme Court Justice Samuel Alito flatly rejected a plea by a Louisiana megachurch pastor to keep his church fully open against orders from the government to limit the size of worship gatherings due to the COVID-19 pandemic.

The application, styled as Spell v. Edwards, complained that the orders by Gov. John Bel Edwards forbade the Life Tabernacle Church from being “fully assemble[d].” In a more legally astonishing question, the case also sought to ask whether the “First Amendment give[s] the Church exclusive jurisdiction over whether to assemble or not.”

Alito, despite being part of the majority which knocked down COVID-19 orders by New York Gov. Andrew Cuomo, apparently preferred that the high court not settle these grandiose questions in Louisiana.

The case was brought in part by Roy Moore’s Foundation For Moral Law, which seeks to literally replace all levels of government with a system based on “biblical law.”

In the early weeks of the pandemic Spell was arrested after gunning a church bus in reverse at a protester. He then refused to wear a mask at a court hearing in which charges were dropped.

At least one of Spell’s parishioners has died of COVID and his lawyer was hospitalized with the virus in April.

Today, the United States Supreme Court denied a motion to hear the case of Spell v. Edwards, which sought to overturn the our mitigation measures. https://bit.ly/33mjYML #lagov

Throughout the course of this pandemic, I have let science and data inform the many difficult decisions I have made regarding gathering sizes and other mitigation measures to slow the spread of COVID. I have taken no such decisions lightly. #lagov

The reasonable, legal mitigation measures have been necessary to protect the people of Louisiana from unchecked spread of the coronavirus, which would limit hospitals’ ability to deliver care. #lagov

I am thankful that the United States Supreme Court denied this effort to overturn these mitigation efforts. For months I have spoken and prayed with leaders of many faiths as we have navigated this pandemic together. #lagov

I know how difficult this time has been for them and I am deeply appreciative of their commitment to practice their faiths even under trying circumstances and with the health of their congregations in mind. #lagov

As Pope Francis wrote of COVID this week: ‘Looking to the common good is much more than the sum of what is good for individuals. It means having a regard for all citizens and seeking to respond effectively to the needs of the least fortunate.’ https://nyti.ms/33pgFVm #lagov

My own faith teaches me that our actions have an impact on others, that we truly are in this together, in 1 Corinthians 12: “There are many parts, yet one body” and “If [one] part suffers, all the parts suffer with it; if one part is honored, all the parts share its joy.” #lagov

I have faith that the people of Louisiana will continue to care for one another by slowing the spread of this terrible illness. #lagov 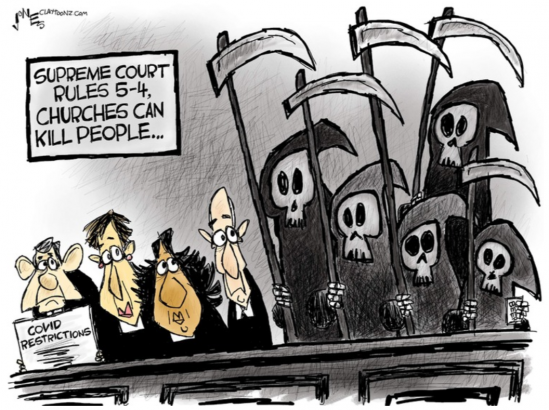 Supreme Court Justice Samuel Alito flatly rejected a plea by a Louisiana megachurch pastor to keep his church fully open against orders from the government to limit the size of worship gatherings due to the COVID-19 pandemic.  That pastor, Tony Spell, whose full legal name is Mark Anthony Spell, earlier this year opened his doors to some 1,800 congregants in violation of orders by the governor that limited the size of gatherings and required social distancing measures.

The application, styled as Spell v. Edwards, complained that the orders by Gov. John Bel Edwards forbade the Life Tabernacle Church from being “fully assemble[d].”  In a more legally astonishing question, the case also sought to ask whether the “First Amendment give[s] the Church exclusive jurisdiction over whether to assemble or not.”  In other words, the church sought to have the Supreme Court declare its assembly function as beyond state action or reproach.  In one passage, the application suggests Spell was merely “[f]ollowing his religious conviction that he must obey God rather than man” when he chose to keep his church fully open.  The application later argues that the First Amendment separation of church and state “was to protect the church from the state.”

From the petitioners’ application:

In Louisiana, one pastor and his church have been fighting since March 2020 for the right that God gives them and the Constitution of the United States secures to them: the right to assemble for church in person. Because of their supposed disobedience to Governor Edwards’ orders, the State of Louisiana has brought nine criminal charges against Pastor Tony Spell in three phases during the span of this litigation. Not only has Louisiana Governor John Bel Edwards refused to respect the First Amendment rights of Pastor Spell and his church, but he has just refused an order of his own legislature to end the state of emergency that purportedly gives him the power to issue emergency orders.

This case presents a threshold question that other applicants did not present to this Court in prior religious liberty challenges: Whether the First Amendment places the decision of whether to assemble solely within the jurisdiction of the Church and not the State. Based on a historical analysis of the First Amendment and the Court’s leading precedents, Applicants herein believe the answer is yes. If it does, then Respondents have no authority to restrict the right of Pastor Spell and his church to meet.

Later on, it argued for the supreme authority of the church:

When the State’s order prohibits a church from assembling, singing together, hearing the word of God preached, laying hands on the sick, baptizing, taking communion, and the like, then the courts owe the State no deference at all.

Alito, despite being part of the majority which knocked down COVID-19 orders by New York Gov. Andrew Cuomo, apparently preferred that the high court not settle these grandiose questions in Louisiana.  The pastor and his church lost previous rounds of litigation in the district and circuit courts, and Alito’s rejection of the matter means the end of the line legally for the petitioners’ visions of church primacy over government.

The case was pressed in part by Judge Roy Moore‘s Foundation for Moral Law.  Moore is listed as one of the five attorneys on the case on behalf of the pastor and the church.  Moore is the former Alabama chief justice and former Senate candidate whose fervent religious views and alleged acts of sexual misconduct are already well known.

Pastor Tony Spell’s trajectory through the courts has itself not been without controversy.  He was refused entry to one of his own court proceedings because he refused to wear a mask.  He also was charged after backing a bus toward a protester.

Among the petitioners’ complaints was that the governor’s orders restricted large-scale gatherings — albeit incrementally — from 250, then to 50, and then to just 10 people “if the people in the gathering would be in a single space at the same time and in close proximity to one another.”  (The latter was suggested by the CDC and adopted by the governor.)

Generally speaking, the Free Exercise Clause of the First Amendment prevents the government from punishing religious beliefs or religious conduct solely because it is religious.  Naturally, Spell and his church cited Church of the Lukumi Babalu Aye, Inc. v. City of Hialeah, a 1993 U.S. Supreme Court case which articulated a test for determining whether government actions unduly infringe upon the right to free exercise.  Under that case, if a law is both religiously neutral and generally applicable to the population at large — e.g., it does not target a specific religious community — the law will not be subjected to strict judicial scrutiny and will almost certainly be allowed to stand.  (The Lukumi Babal court struck down a city ordinance aimed at a particular religious sect which was sacrificing animals for religious reasons.)

In this case, the petitioners — Spell and his church — articulated the correct legal standard under Lukumi Babal but then argued that the Louisiana governor’s executive orders simply “are not law.”  (In reality, executive orders are a type of law and carry the “force of law.”)  The petitioners then said that if they were laws, the executive orders did “discriminate against religious practices on their face” because “exceptions exist for other entities that do not apply to churches.”  Here, the petitioners’ argument attempted to latch on to circuit court decisions this year against COVID-19 in Kentucky orders promulgated by Gov. Andy Beshear.  However, in this case, the arguments were unpersuasive.

Also unpersuasive were the petitoners’ arguments surrounding Emp’t Div., Dep’t of Human Res. of Or. v. Smith, the 1990 case penned by conservative darling Antonin Scalia from which Lukumi Babal eventually sprang.  Smith held that a state government could legally withhold unemployment benefits from a man fired for using the drug peyote for religious ceremonial reasons.  Scalia’s view was that religious activities could subject a person to negative action by the government if the government was seeking to apply a law which applied to everybody and which did not directly target a religion.

“The government’s ability to enforce generally applicable prohibitions of socially harmful conduct, like its ability to carry out other aspects of public policy, cannot depend on measuring the effects of a governmental action on a religious objector’s spiritual development,” Scalia wrote (internal quotations omitted).  He also bewailed the possibility that “constitutionally required religious exemptions from civic obligations of almost every conceivable kind” might start to pop up if the courts agreed to a stream of requests for religious carve-outs.  Scalia provided a de facto grocery list of regulations for which religion provided no excuse.  Some of those items included “compulsory military service,” “the payment of taxes,” “health and safety regulation[s],” “vaccination laws,” “drug laws,” “traffic laws,” “minimum wage laws,” and “child labor laws.”

The Louisiana pastor and his church argued that a random passage in Smith should be interpreted to mean that “assembling for religious worship [was] completely off limits” for government regulation or interference and that the government was “completely powerless” to get it the way of religious assembly.

6 thoughts on “The same story , two sites, I don’t understand the difference between this one and the NY one?”