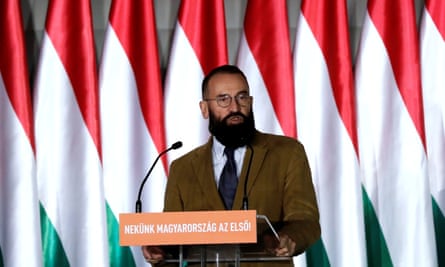 “What our representative, József Szájer, did has no place in the values of our political family. We will not forget nor repudiate his 30 years of work, but his deed is unacceptable and indefensible,” said Orbán on Wednesday evening. He said Szájer had left the party. He had already resigned as an MEP over the weekend.

Orbán’s government has enacted a range of legislation over the past decade infringing on LGBT rights, and Szájer boasted of personally rewriting Hungary’s constitution to define marriage as a heterosexual institution in 2011.

In a terse statement, the Fidesz grouping in the European parliament commended Szájer’s resignation. “He made the only right decision. We acknowledge his decision, just as we acknowledge that he has apologised to his family, his political community and to the voters,” it read.

Prior to Orbán’s intervention, Hungarian ministers were tight-lipped when questioned by a reporter from the outlet Telex on Wednesday morning as they arrived for a cabinet meeting at a government building.

“Mr Szájer made the only possible right decision, and all the rest is his personal matter,” said the justice minister, Judit Varga. Other ministers ignored questions. A police cordon was set up to prevent the journalist from questioning any further officials.

Szájer admitted he had been at a “house party” but said the drugs the police found on him were planted. He apologised to his family, but made no reference to the nature of the party. One person who knew Szájer said while the politician never discussed his sexuality, it was considered an “open secret” among Fidesz circles.

David Manzheley, the organiser of the party, told Belgian newspaper HLN that Szájer had come to the party as the plus-one of another guest. “I always invite a few friends to my parties, who in turn bring some friends along, and then we make it fun together. We talk a bit, we drink something – just like in a cafe. The only difference is that in the meantime we also have sex with each other,” he said. He added that guests had been “completely naked” at the time of the raid.

In 2011, Szájer boasted that he had drafted Hungary’s new constitution on his iPad, including a clause that explicitly defined marriage as between a man and a woman. He dismissed a question from a journalist who asked how he could refer to it as “a 21st-century constitution” when it did not guarantee LGBT rights.

Szájer said: “It depends how we interpret the 21st century. I don’t think that the traditional concept of marriage has changed just because we came into another millennium.”

In the intervening decade, Orbán’s government has gone further in its “traditional values” drive. Last year, senior Fidesz figures called for a boycott of Coca-Cola after it used gay couples in a Hungarian advertising campaign, while the country announced late last year it would not participate in the Eurovision song contest, with sources saying the contest was deemed “too gay” for conservative government and public media bosses.

Last month, as Hungary struggled amid surging coronavirus cases, Orbán’s government introduced a new set of constitutional amendments to parliament, including one that stipulates that, in a parent-child relationship, “the mother is a woman and the father is a man”. It also said that only heterosexual married couples could adopt children, with even single people requiring special ministerial dispensation.

The government’s justification for the amendment explained that “new, modern ideologies in the western world raise doubt about the creation of the male and female sex, and endanger the right of children to have healthy development”.

Opposition parties seized on the scandal as evidence of Fidesz hypocrisy, but leading government figures appear to have decided the best policy is to remove Szájer from the political spotlight and hope the scandal blows over.

In a programme on the pro-government Pesti TV, host Zsolt Jeszenszky criticised liberals for making “a huge political deal out of a sex scandal” and praised Szájer’s statement of apology. He also insinuated, as did many other pro-government commentators, that the scandal or arrest could have been a setup by unnamed enemies of Hungary’s government.

2/ After Viktor Orbán came to power in 2010, Szájer famously drafted a new constitution for Hungary on his iPad (yes, really), becoming the legal architect of Orbán’s regime. There was no consultation with the opposition or anyone outside the government.

3/ Here’s the English version of Hungary’s (Szájer’s) constitution. 'Article L' on "protecting the institution of marriage as the union of a man and a woman" was inserted, essentially making it impossible for gay couples to get married. But that’s not all.

4/ It’s not just about marriage – this part of the constitution on marriage and families became a reference point for future legislations aimed at restricting the rights and freedom of LGBT people. Moreover, it became the legal justification for Viktor Orbán’s culture war.

5/ Just a few examples (and I’m gonna be using lots of Guardian articles by @floragaramvolgy and @shaunwalker7 on this)… Most recently, a consitutional amendment was introduced that "would ensure that only heterosexual married couples can adopt children”

6/ In May – also following up on Szájer's original 'Article L’ -, Orbán’s parliamentary majority "has voted to end legal recognition for trans people (…) The new law defines gender as based on chromosomes at birth”.

7/ It’s not just about what is included in the constitution drafted by Szájer – it is just as important what’s lacking. For example, there is no constitutional protection against discrimination based on the grounds of sexual orientation.

8/ And then there is all the culture war going on, where the Szájer-drafted constitution always comes up as an argument against anything that is pro-LGBTQ. Look at this story from last year, for example:

9/ The whole anti-gay crusade became such an integral part of the Orbán government’s agenda that it started allying itself with some really weird and scary people.

10/ From last year: "Hungary will not participate in next year’s Eurovision song contest, amid speculation the decision was taken because the competition is “too gay” for the taste of the country’s far-right government and public media bosses."

11/ Recently, the government's anti-gay crusade reached new levels when even Viktor Orbán spoke out against a children’s book (!) with LGBTQ characters, saying that "there is a red line that cannot be crossed (…) Leave our children alone!"