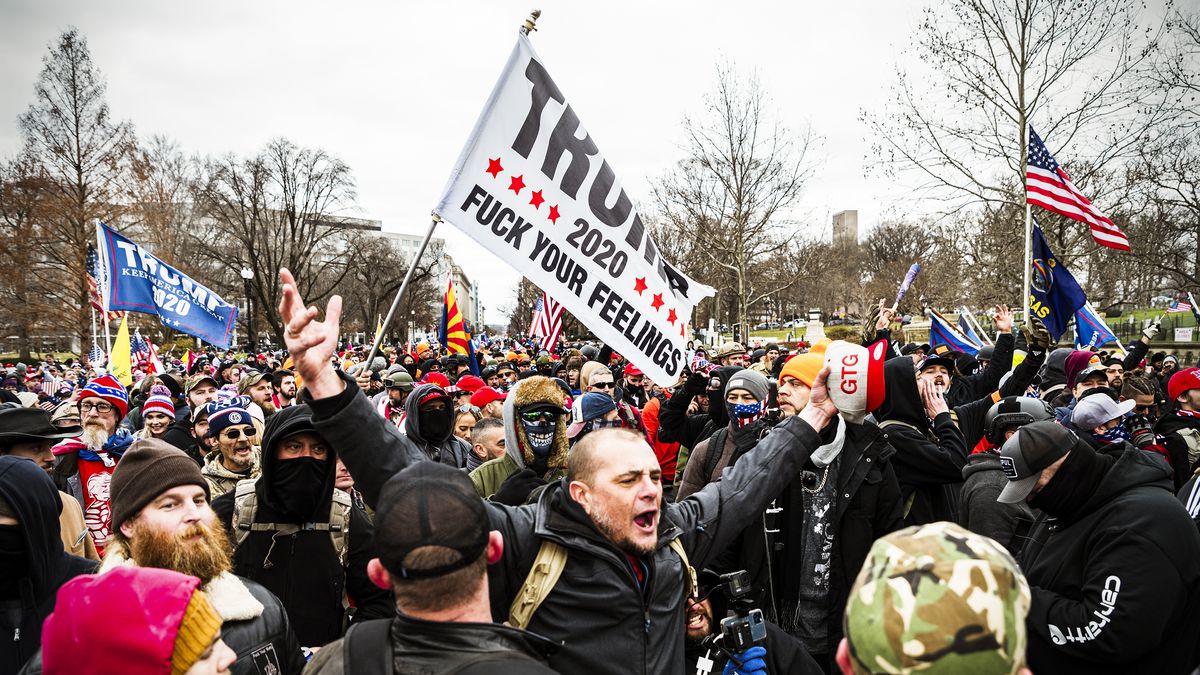 A white man, a smug grin on his face, hauls off a congressional lectern. Another sports a gun at his waist and carries zip ties, as if prepared to take hostages. Yet another places his foot on House Speaker Nancy Pelosi’s desk before stealing a piece of her mail and leaving a handwritten note: “WE WILL NOT BACK DOWN.”

Feces smeared throughout a federal building. Blood on the marble bust of a former president. Nooses on Capitol Hill. These are the images captured on January 6 when an enraged pro-Trump mob of hundreds flooded the gates of the US Capitol, America’s fortress of democracy.

An immediate concern from observers was how these insurrectionists successfully breached a federal building that has its own police force of more than 2,000. The pro-Trump mob was in control on the outside and inside. Despite public announcements of a plan to “take America back” on January 6 in DC, even from the president himself, Capitol Police had not initially requested assistance from the DC National Guard or DC police, according to the Washington Post — and they were outnumbered.

A mere 69 people were arrested in Washington on Wednesday night after the riot that temporarily halted the counting of Electoral College votes to certify President-elect Joe Biden’s victory. Just 69 were arrested on site despite widespread photos and footage of rioters bashing windows and scaling the walls of the Capitol grounds. In fact, in some video, officers can be seen holding the hands of the extremists, escorting them down steps, holding the doors of the Capitol open for them to leave, and taking selfies with them.

In comparison, police in Washington arrested 427 people between May 30 and June 2 last year, the peak of the uprising that came in response to the police killings of Black people like George Floyd and Breonna Taylor. The highest number of arrests, 289, came on June 1 when curfew was set at 7 pm. (This was the same day Trump authorized the use of tear gas on peaceful protesters in Lafayette Square to take a photo with a Bible outside of St. John’s Church.) But when curfew came at 6 pm on January 6, extremists were still roaming around downtown, and police didn’t make widespread arrests.

While some were still wondering how this happened, others, especially Black people and other people of color, grew indignant watching the coup attempt unfold online and on TV, knowing that the whiteness of the insurrectionists acted as a shield — protecting them from being seen as a threat before, and while, they stormed the Capitol. For activists who endured violence at the hands of police when they were merely asking for them to stop executing Black people, this inequity is why they protested in the first place.

“White folks and white supremacists are treated with deference when they engage in violence and put the Capitol under siege,” Melina Abdullah, a co-founder of Black Lives Matter Los Angeles, told Vox. “But activists who are attempting to elevate the sanctity of Black life are treated with disdain.”

There are many details that remain unclear about botched protocol on Wednesday — why the National Guard wasn’t activated sooner, why police reportedly had no intelligence on what the extremists had planned. But the fact that people are searching for answers as to why white people attempted to claim what they believed they own proves that white supremacy is functioning as it always has: unfiltered and out in the open.

As I reported in September, research from the Armed Conflict Location & Event Data Project found that out of 7,750 Black Lives Matter protests across 2,400 locations across the country, 93 percent of them were peaceful — yet images of burning and headlines of looting were plentiful, with the president referring to the protesters as “thugs.”

New research from the organization compares the difference in law enforcement response between left-wing protests (anti-Trump, pro-Biden, Count Every Vote, Black Lives Matter, Abolish ICE) and right-wing protests (pro-Trump, anti-Biden, Back the Blue, QAnon, Stop the Steal, etc.), finding that law enforcement was more than twice as likely to use force against liberal demonstrations between May and November. Researchers wrote:

This evidence bears out anecdotally for the many activists and Black Lives Matter protesters who joined these demonstrations throughout the year. According to Abdullah, a December child-led protest she organized in Los Angeles resulted in violence from the police.

“The police were sicced on us and they made a beeline for our children,” Abdullah explained. “They tackled one of our 72-year-old elders and stomped on him, and then the people who came to his aid were beaten and arrested.” According to Abdullah, police arrested a trans sister involved in the demonstration and threatened to book them into men’s central jail. “There was no decency,” Abdullah said.

This scene was common in 2020 and looked similar to what happened in Ferguson, Missouri, in 2014 and Selma, Alabama, in 1965. Photo roundups were packed with images of officers clad in riot gear, moving to corner Black Lives Matter protesters and put their backs against the wall. Other haunting images showed officers destroying the water bottles that protesters used to wet their eyes after they were tear-gassed, or colluding with far-right counterprotesters. In some instances, police kettled protesters to make arrests, a tactic of herding them into a confined space so they can’t escape. These images might have shocked liberal white viewers, but they were in line with what activists had been fighting against all along.

While the number of Black Lives Matter protests has dropped since the summer, protests against wearing masks and false claims of election fraud, primarily attended by white people, have risen this fall — with little police interference. According to ACLED, police violence against Black Lives Matter protesters deters participants and slows mobilization. But protests remain stronger when they’re not disturbed by violence or the threat of it. According to the Washington Post, 14,000 protesters were arrested between late May and late June last year.

At “Stop the Steal” rallies — rallies largely attended by far-right pro-Trump supporters — the police fit in. They wave flags with thin blue lines to show support and vow to “Back the Blue”; the two groups are allies. Meanwhile, at Black Lives Matter protests, protesters speak against the actions of law enforcement, automatically positioning officers as a counterprotesting force, a force meant to upheld the status quo. This dynamic influences how police handle each group.

“Today’s insurrection and coup by hundreds of pro-Trump supporters is one more example of the hypocrisy in our country’s law enforcement response to protest,” Black Lives Matters Global Network said in a statement. “Make no mistake, if the protesters were Black, we would have been tear gassed, battered, and perhaps shot.”

As more information about what transpired on Wednesday comes to light, law enforcement officials still maintain that there was “no intelligence that suggested there would be a breach of the Capitol.” Yet it is widely known that the day was planned in plain sight on pro-Trump forums, so much so that participants wore merchandise labeled “Civil War January 6, 2020.”

What’s evident is that the organizers of Wednesday’s rallies were not taken seriously, as white extremists are often infantilized and given room to work out their feelings and blow off steam. We are told we need to listen to them, to try to understand their plight and psychology.

Meanwhile, for centuries, Black people have stated that this white entitlement — to take government, property, lives — is the very core of American identity. From the time colonizers brought enslaved people to America’s shores to Trump encouraging his supporters to walk down to the Capitol and be strong, this has been the case.

“I have a hard time believing anyone who says they are shocked by what took place in the Capitol on January 6,” University of Pittsburgh professor of history Keisha N. Blain told Vox. “We saw how whiteness works in the United States in 2015 when a white supremacist walked into Emanuel AME Church, gunned down nine Black people, and then was peacefully arrested and even taken for a bite to eat before being booked. Some people seemed to be shocked then, and every time another incident takes place, the same people express shock yet again.”

Following the riot, elected officials took to social media to express the sentiment that Black bodies would have perished if they stormed the Capitol. Michelle Obama called “seeing the gulf between the responses to yesterday’s riot and this summer’s peaceful protests and the larger movement for racial justice” painful. Vice President-elect Kamala Harris made it clear that there are “two systems of justice” in America. Biden voiced his concern on the matter of racism — BLM protesters would have been “treated very differently.”

“I have no idea what it will take for people to stop being shocked by how whiteness works in American society,” Blain said. “My sense is that too many people choose to be shocked because that response is easier than actually denouncing white supremacy and actively working to dismantle it.”

There is another striking image from the Capitol that captures this sentiment. In it, a white man holds a large Confederate flag in front of two portraits, one of abolitionist Charles Sumner, the other of John C. Calhoun, a pro-slavery advocate and the seventh vice president of the United States. The juxtaposition of the portraits was stark. The battles they were fighting rage on today. And on Wednesday, it was clear who was still winning.

8 thoughts on “Whiteness is at the core of the insurrection”