President Donald J. Trump was sicker with Covid-19 in October than publicly acknowledged at the time, with extremely depressed blood oxygen levels at one point and a lung problem associated with pneumonia caused by the coronavirus, according to four people familiar with his condition.

His prognosis became so worrisome before he was taken to Walter Reed National Military Medical Center that officials believed he would need to be put on a ventilator, two of the people familiar with his condition said.

The people familiar with Mr. Trump’s health said he was found to have lung infiltrates, which occur when the lungs are inflamed and contain substances such as fluid or bacteria. Their presence, especially when a patient is exhibiting other symptoms, can be a sign of an acute case of the disease.

Just so we are clear, Trump got sick enough from COVID to understand personally how bad it was, got the best medical care possible, then went and got as many if his supporters sick as he could so he could puff his ego and hopefully get reelected. https://t.co/p0AxKCe1h9

Trump Was Sicker Than Acknowledged With Covid-19

WASHINGTON — President Donald J. Trump was sicker with Covid-19 in October than publicly acknowledged at the time, with extremely depressed blood oxygen levels at one point and a lung problem associated with pneumonia caused by the coronavirus, according to four people familiar with his condition.

His prognosis became so worrisome before he was taken to Walter Reed National Military Medical Center that officials believed he would need to be put on a ventilator, two of the people familiar with his condition said.

The people familiar with Mr. Trump’s health said he was found to have lung infiltrates, which occur when the lungs are inflamed and contain substances such as fluid or bacteria. Their presence, especially when a patient is exhibiting other symptoms, can be a sign of an acute case of the disease. They can be easily spotted on an X-ray or scan, when parts of the lungs appear opaque, or white.

It has been previously reported that Mr. Trump had trouble breathing and a fever on Oct. 2, the day he was taken to the hospital, and the types of treatment he received indicated that his condition was serious. But the new details about his condition and about the effort inside the White House to get him special access to an unapproved drug to fight the virus help to flesh out one of the most dire episodes of Mr. Trump’s presidency.

The new revelations about Mr. Trump’s struggle with the virus also underscore the limited and sometimes misleading nature of the information disclosed at the time about his condition.

The former president resisted being taken from the White House to Walter Reed, relenting when aides told him that he could walk out on his own, or risk waiting until the U.S. Secret Service was forced to carry him out if he got sicker, two people familiar with the events said.

While Mr. Trump was hospitalized at Walter Reed, his medical team sought to downplay the severity of the situation, saying that he was on an upswing. At 74 and overweight, he was at risk for severe disease, and was prescribed an aggressive course of treatments. He left the hospital after three days in which he at one point staged a brief ride in his armored sport-utility vehicle to wave at the crowd of supporters outside the building.

A person close to the former president denied that he had been seriously ill, echoing comments Mr. Trump himself made after he was sick.

There are still unanswered questions about whether Mr. Trump was already sick with Covid-19 when he participated in a presidential debate on Sept. 29, just two days before the public announcement that he had been diagnosed with the disease and three days before his deteriorating condition forced him to go to Walter Reed.

Mr. Trump’s physician, Dr. Sean P. Conley, repeatedly downplayed concerns about Mr. Trump’s condition during his illness. At one briefing, Dr. Conley said Mr. Trump was receiving X-ray and CT scans. But when asked about whether there was evidence of pneumonia or damage to the tissue, he would only say there were “expected findings, but nothing of any major clinical concern.” 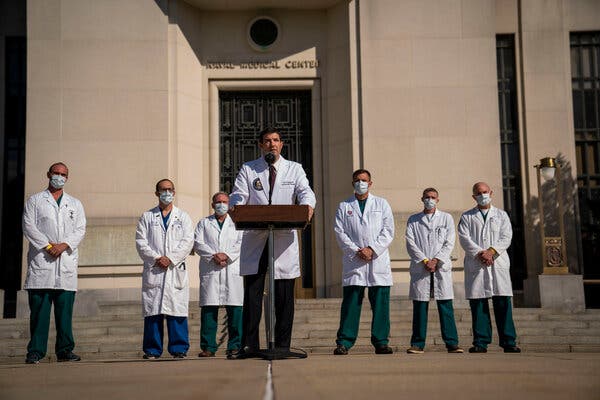 Dr. Conley also told reporters that while Mr. Trump’s oxygen level had dropped to 93 percent, it had never dropped to the “low 80s.”

Mr. Trump had trouble breathing at the White House. He was twice given oxygen before being taken to Walter Reed, as Dr. Conley acknowledged after it was reported by The New York Times.

While still at the White House, Mr. Trump received a drug developed by the biotechnology firm Regeneron Pharmaceuticals. The antibody cocktail — not widely available at the time — helps people infected with the virus fight it off.

After Mr. Trump was hospitalized, he began a regimen for a steroid, dexamethasone, which is usually recommended only for Covid-19 patients who have severe or critical forms of the disease, often those who need mechanical ventilation or supplemental oxygen.

And he received a five-day course of the antiviral drug remdesivir. Medical experts at the time believed that his medication course was a clear signal of significant issues related to his lungs.

In news conferences outside the hospital that weekend, Dr. Conley offered data that made it appear his patient was recovering quickly. He noted that Mr. Trump had fared well on a spirometry test, which measures lung capacity. “He’s maxing it out,” Dr. Conley said. “He’s doing great.”

When Mark Meadows, the White House chief of staff, tried to surreptitiously tell reporters that the situation was more dire, Mr. Trump erupted in anger, according to people who spoke with him.

On Sunday, Oct. 4, Dr. Conley acknowledged that he had given a rosy version of Mr. Trump’s condition.

“I was trying to reflect the upbeat attitude that the team, the president, his course of illness has had,” he said. “I didn’t want to give any information that might steer the course of illness in another direction, and in doing so, you know, it came off that we were trying to hide something, which wasn’t necessarily true.”

Mr. Trump appeared to still be struggling with the disease when he returned to the White House, where he stationed himself on a balcony in a choreographed scene, tearing his mask off and saluting his helicopter. Doctors at the time noted how Mr. Trump used his neck muscles to help him breathe in those moments, a classic sign that someone’s lungs are not taking in enough oxygen.

On the night of his diagnosis, Oct. 1, White House officials scrambled to get the Regeneron antibody cocktail — not at that point authorized by the Food and Drug Administration for treatment — to Mr. Trump.

A top lawyer in the White House Counsel’s Office, Patrick F. Philbin, called Dr. Stephen M. Hahn, the F.D.A. commissioner at the time, to discuss how the agency could approve the drug’s use for two senior administration officials he did not want to identify, according to one person who heard about the call.

Mr. Philbin was exploring how the president could quickly get access to the drug through normal F.D.A. procedures. Regeneron had already signed off on the use of the doses, Mr. Philbin told Dr. Hahn.

Dr. Hahn and other F.D.A. officials, including Dr. Patrizia Cavazzoni, the top federal drug regulator, worked to clear the drug through a standard process known as an emergency investigational new drug application, often used for very ill patients who agree to take an experimental drug still being tested in clinical trials. The agency reviews the medical histories of those patients to identify whether there might be severe risks to take a treatment.

Regeneron shipped a package of doses that included extras, “in case of any administration issues,” a company spokeswoman said.

The extras were never returned. Dr. Conley at one point told associates they had been sitting in a refrigerator in the White House’s medical office.

Only in the days following the application’s approval did White House officials acknowledge that the doses were for Mr. Trump and the first lady, Melania Trump, who also tested positive for the coronavirus but turned down the drug, which is infused intravenously for about an hour. The person close to the former president also denied that Mrs. Trump had turned down the drug.

Around that time, as other people close to Mr. Trump started getting sick, his son-in-law and senior adviser, Jared Kushner, offered to facilitate getting the Regeneron treatment for them, two people with knowledge of the discussions said. An aide to Mr. Kushner disputed that he had made such an offer at that time.

In the weeks after his hospitalization, Mr. Trump was convinced that the Regeneron treatment had saved his life, telling aides, “I’m proof it works.”

That line became a running joke among top health officials, who would ask each other whether anyone was going to break it to Mr. Trump that he was in fact a failed clinical trial result for Regeneron, since the aim is to prevent people from being hospitalized after receiving it, one former senior administration official said.

2 thoughts on “Trump Was Sicker With COVID Than Was Reported”