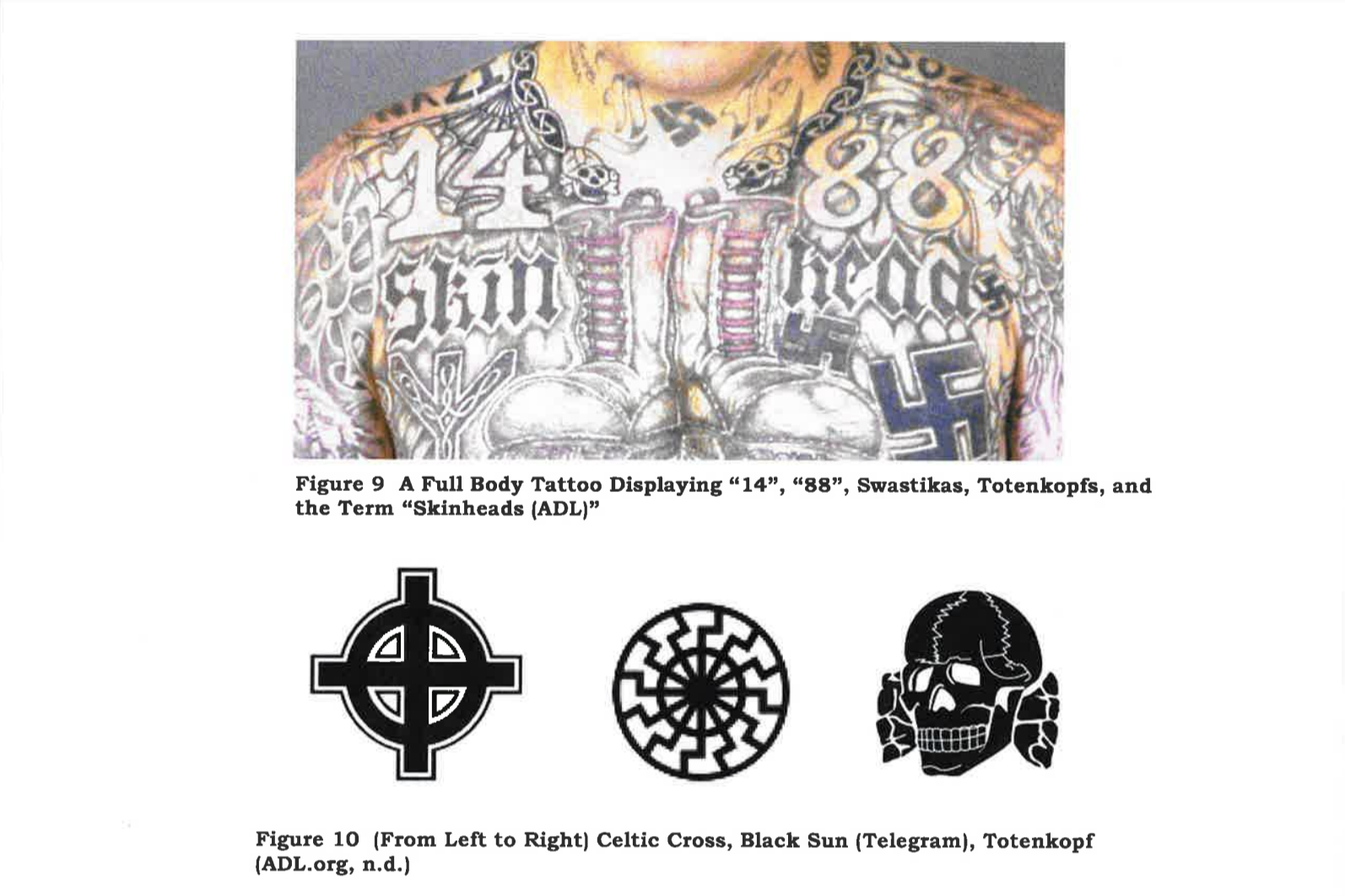 A screenshot of an October 2020 Pentagon report on screening recruits for extremism. The image shows tattoos in a section of the report about using “symbols as possible indicators.” (Department of Defense/Obtained by CQ Roll Call)

A soldier in the Florida National Guard who co-founded a murderous fascist group was chatting with a fellow white supremacist in the extremist “Iron March” online forum in 2016 when the guard member made a remarkable statement.

The guard member said he felt free to be a neo-Nazi in the U.S. Army.

“Are you worried at all about being found by your mates or someone, now being in the U.S. military?” he was asked. “You’ll be straight f—ed surely.”

To that, the soldier replied: “I was 100% open about everything with the friends I made at training. They know about it all. They love me too cause I’m a funny guy.”

A large database containing this and many other Iron March chats was published in 2019 on the Ars Technica news site. A screenshot of the neo-Nazi guardsman’s exchange is spotlighted in a previously unpublicized October 2020 Pentagon report to Congress that details the military’s efforts to keep extremists, particularly fascists, out of the military.

The report, obtained by CQ Roll Call, paints a stark picture of white supremacist inroads in the U.S. military. And it reveals several steps the Pentagon is now reviewing to kick such people out and help keep them out — from accessing an FBI database of extremist tattoos to improving security clearance questions.

While neo-Nazis and other extremists are rare in the U.S. armed forces, exactly how rare is not known. And military veterans who adhere to supremacist beliefs have been overrepresented in recent American violence — including in the Jan. 6 attack on the Capitol.

The Pentagon report said U.S. military personnel and veterans are “highly prized” recruits for supremacist groups, and leaders of those groups try to join the military themselves and get those already in their groups to enlist. Their goal is to obtain weapons and skills and to try to borrow the military’s bravado and cachet, the authors suggested.

Extremism is a “threat” of unclear dimensions in the U.S. military, not only because of possible violence but also because it endangers morale, they said.

“Despite a low number of cases in absolute terms, individuals with extremist affiliations and military experience are a concern to U.S. national security because of their proven ability to execute high-impact events,” the report stated. “Access to service members with combat training and technical weapons expertise can also increase both the probability of success and the potency of planned violent attacks.”

Rep. Pete Aguilar, D-Calif., a member of the Defense Appropriations Subcommittee and a former member of the Armed Services Committee, wrote the requirement for last fall’s Pentagon report in the fiscal 2020 defense authorization law.

Aguilar said in an interview Tuesday that he plans to introduce legislation on Thursday that would require the Pentagon to implement the report’s recommendations.

“What the report made clear is that white supremacists are using our military to further their hateful and violent agenda,” Aguilar said. “We need further collaboration between agencies like the DoD and FBI to make sure that we’re keeping extremists away from our servicemembers and keeping our communities safe as well.”

The Pentagon report’s authors did not name any of the personnel or veterans who were cited in the document, including the National Guard member in the Iron March exchange. But the report makes it abundantly clear who it is: a co-founder of Atomwaffen Division, a group that once comprised 80 members in several states and has been implicated in several hate-fueled murders.

The report also described the soldier as a Florida National Guard member who was sentenced in 2018 to five years in jail for possessing bomb materials. And a footnote refers to an AP story about that person, Brandon Russell, a loner from Tampa who was 22 at the time of his sentencing.

While Russell was serving in the Guard, officials later told reporters, he displayed on his right shoulder a tattoo bearing the radiation-warning symbol — the insignia of the Atomwaffen Division.

But neither the tattoo nor his purported statements to his Army colleagues raised a red flag prior to his arrest, a command investigation later found. Army Guard officials said they lacked a database of extremist tattoos they could refer to, according to press reports at the time.

The Pentagon report also describes other communications from white supremacists in the U.S. military.

Another user of the Iron March chatroom, a self-described infantryman with neo-Nazi views, described how it is possible to find “our kind” in the military’s ranks.

“A good way people in the military find other rightists is to simply wear a shirt with some obscure fascist logo,” the person wrote. “The symbols of SS units are especially common, even on things as public as cars, flags and helmets.”

The report recommends several steps to combat the problem. One proposal is to ask more specific questions of security clearance applicants and their neighbors because merely asking if the applicants are involved in “terrorism,” for example, is too imprecise to be useful.

Another idea is to give Defense Department personnel access to an FBI database of extremist tattoos like the Atomwaffen sign and to use other FBI tools and training.

A third possible action is to establish a special designation on military discharge and separation forms for people who are booted out of the service for extremist behavior. Only the Navy has such a designation today.

In addition, social media can be surveilled for signs of extremism, the report’s authors said, adding that there are civil liberties challenges in doing so. Data companies can help, the report said, but data must supplement well-trained recruiters and investigators.

Matthew Donovan, who was the Pentagon’s undersecretary for personnel and readiness last year, said in a cover letter for the October report that the Defense Department is implementing most of its proposals.

A Pentagon spokesman had yet to provide a progress update this week.

Experts say violent right-wing extremism has surged in the United States in the past several years. But the extent of the military’s own extremism problem has yet to be tracked, Pentagon officials have acknowledged.

This is the case despite periodic reports of hate-inspired violence by military veterans and despite recent Military Times polls finding that about one-third of active-duty personnel have witnessed signs of white supremacy in the ranks — and nearly half consider it more of a threat than North Korea and nearly as menacing as foreign terrorism, according to a 2020 survey by the paper.

The George Floyd protests highlighted the issue of racism within the military. And the overrepresentation of current and former military personnel among the Jan. 6 rioters at the Capitol — about 15 percent of the more than 230 people criminally charged so far, according to news reports — has intensified public scrutiny of the matter. White supremacist groups such as the Proud Boys were pivotal players in the Jan. 6 attack, and NPR reported that one Proud Boys rioter was an Army veteran of the Iraq War.

Aguilar’s bill arrives this week amid a stepped-up focus on extremism in the military.

Defense Secretary Lloyd J. Austin III recently ordered that each of the armed services stop training and other activities in the next two months to take stock of the matter.

The problem has been a focus in the last couple of defense authorization bills, or NDAAs. Aguilar has written provisions aimed at improving screening procedures in the past two such laws. The most recent NDAA also creates a new deputy inspector general in the Pentagon to oversee diversity and anti-extremism efforts. The fiscal 2020 NDAA law required a federal report on domestic extremism that is nearly a year overdue.

Amid racial unrest last year, the Pentagon created a diversity task force that in December recommended a review of efforts to keep fascists out of the military. The panel also urged creation of a separate article in the military’s criminal code barring extremist acts of violence.

Sean O’Donnell, the acting Pentagon inspector general, is conducting his own assessment of the problem.

Russell’s three roommates in Tampa were also Atomwaffen members. One of them, Devon Arthurs, was charged with shooting and killing the other two roommates in 2017, but Arthurs has since been found medically unfit to stand trial because of conditions that include schizophrenia and autism.

Other group members have also been charged with murders.

Even though police found explosives in Russell’s garage, they inexplicably released him after he said it was for model rockets.

But they rearrested him later, after he and another Atomwaffen member were found driving to the Florida Keys with a pair of rifles and 1,000 rounds of ammunition but no luggage or food, ProPublica and the PBS program “Frontline” reported in 2018.

Since Russell’s conviction, several other current or former military personnel have been charged with, or convicted of, acts of extremist violence, in addition to those involved in the Jan. 6 attack.

Pentagon guidance bars active participation in extremist groups or public advocacy of such views, although merely belonging to a group such as Atomwaffen Division is not explicitly against the rules.

While sporting an extremist group’s tattoo is not allowed, the ban is only enforceable if military leaders have access to an updated database of tattoos — something they currently lack.

Further complicating the task of screening extremists is the fact that some of the most destructive military veterans in the past have not been affiliated with any particular extremist group. Leading this list is Timothy McVeigh, an Army veteran with anti-government beliefs who blew up a federal building in Oklahoma City in 1995 using a bomb filled with ammonium nitrate — one of the explosives that Russell reportedly was amassing in his garage.