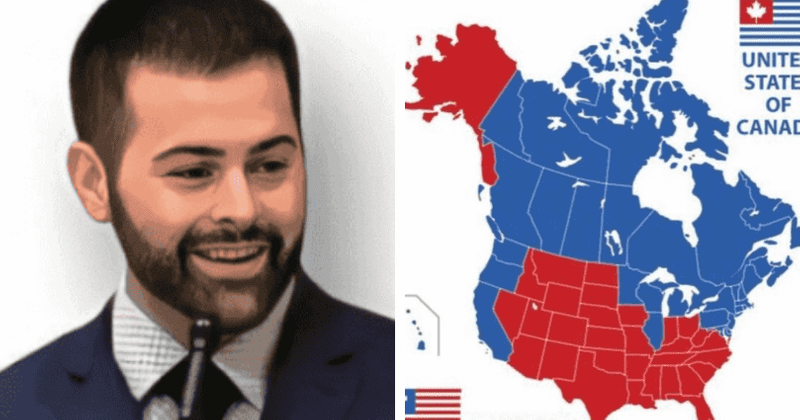 After Gab CEO Andrew Torba posted his ideal view of the nation with the map of Jesusland, he created a wave on social media. In no time, Jesusland went trending as social media users supported, mocked, laughed and even confusedly asked “what is Jesusland?”.

The map of Jesusland divides the United States and Canada into ‘The United States of Canada’ and ‘Jesusland’ implying a political divide between the northern and southern regions of North America. Twitter user PatriotTakes took to the social networking site to share the image posted by Torba.

“In case you were wondering what Gab CEO Andrew Torba wants, take a look. He posted this 3 hours ago,” the tweet read alongside the map of Jesusland highlighting the red and blue political divide of the nation.

But before we get to how the Internet feels about this, we must answer confused users. “ayo whats “Jesusland” is this some Disney land sort of thing?? /j,” one user asked while another wondered: “jesusland sounds like a really cool new amusement park, do they have any rmcs?”

Unlike the first impressions of the name, Jesusland is nowhere close to an amusement park. In fact, if you see the breakdown of the division of the states, it is easily quite a scary proposition. “Jesusland sounds like an awful amusement park,” one user tweeted.

Shortly after the 2004 US presidential election, after George W Bush‘s victory, the Jesusland map was created as an internet meme in order to satirize the red/blue states scheme by dividing the United States and Canada into “The United States of Canada” and “Jesusland”. According to Freakonomics, it portrays the John Kerry-voting states joining Canada rather than suffering another four years of George W Bush.

The map implies the existence of a fundamental political divide between contiguous northern and southern regions of North America. The popular Internet meme, which resurfaces every few years, is in the form of a map of the US and Canada and depicts a new hypothetical national border between the two countries.

The “blue states” from the 2004 election — New England, the Mid-Atlantic states, the Pacific coast and the Great Lakes states of Illinois, Michigan, Minnesota and Wisconsin — have been merged with Canada to form a single contiguous nation of more than 170 million inhabitants.

This land is labeled the “United States of Canada”. The remaining “red states” are labeled as “Jesusland”. The Freakonomics blog stated that the map reflected the “despair, division and bitterness” of the election campaign and results. The internet today is having a field day with the meme. “Botox AND Jesusland. What a time to be alive,” a user tweeted.

And it continued. “You will refer it it as just ‘Canada’ You’ll switch to the metric system The government will be a parliament based Every new province will be issued a hockey team.” Another wrote: “Jesus would be lynched by ‘Christians’ if he showed up in #Jesusland.”

“I feel like most of the inhabitants of “Jesusland” are gonna be awfully disappointed to find out what Jesus really looked like, according to recent AI compositing…” a user posted. “I’ll gladly live in the US of C to avoid Jesusland. Mostly because, I suspect, even Jesus wouldn’t be welcome in Jesusland,” another added.

But the meme also made many angry. “I can’t tell you how much stupid shit like this pisses me off. There are millions of Black, brown and Indigenous people living in ‘Jesusland’ who bust their asses to make some of these places better but instead of addressing barriers they just want to write us off,” one tweeted.

I can't tell you how much stupid shit like this pisses me off. There are millions of Black, brown and Indigenous people living in "Jesusland" who bust their asses to make some of these places better but instead of addressing barriers they just want to write us off. pic.twitter.com/ZCAUgd6IyY

5 thoughts on “What is Jesusland? Gab CEO Andrew Torba posts hypothetical US map, Internet says ‘even Jesus won’t be welcome’”